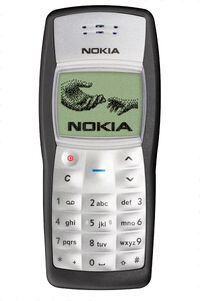 The Nokia 1100, and the closely-related variant the Nokia 1101, is a durable and very simple GSM mobile phone produced by Nokia with a 96 x 65 monochrome screen. It is targeted towards developing countries and users who do not require advanced features beyond making calls and SMS text messages, alarm clock, reminders, etc.

The 1100 is similar to the now discontinued 5110/3210/3310 models that were among the most popular cell phones in the world a few years ago before handsets developed several new features such as cameras, polyphonic ringtones and colour screens.

Over 200 million Nokia 1100 cellphones have been sold since its launch in late 2003, making it the world's best selling phone handset,[1] as well as the best selling consumer electronics device in the world, beating Sony's PlayStation 2 (138 million), Apple's iPod (220 million) and Motorola's RAZR (120 million).[2]

Nokia's one billionth phone sold was a Nokia 1100 purchased in Nigeria.[3]

As of early 2009, it has been in the news due to a firmware flaw [4] in a batch of phones that were manufactured in a plant in Bochum, Germany[5]. The phone can be programmed to receive messages directed to a different phone number, thus receiving sensitive bank or other data[6]. This flaw was brought to authorities' attention after some phones were sold for over US$32,000 [7]. There is only one source, Ultrascan, that all these articles fall back to.

The phone uses a GSM method of activation via SIM card. The Nokia BL-5C battery has a long standby and talk time - this battery is used in more advanced models that have increased power needs for their features, but in the basic 1100 it consumes a fraction of the power and therefore lasts for up to 400 hours[17] between charges. The 1100 is offered for use with a wide range of mobile phone networks. The 1101 has support for Wireless Application Protocol (WAP).