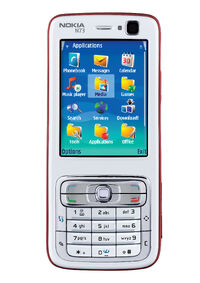 The Nokia N73 is a smartphone by Nokia officially described as a "multimedia computer". In common with other Nokia 'Nseries' and 'Eseries' phones of its time (late 2006), the N73 comes loaded with many software applications, including contacts, messaging, picture and video galleries, a music player, a Visual FM Radio, RealPlayer, an IM client, a WAP browser, a full web browser based on KHTML/WebKit, a Microsoft Office document viewer, a PDF viewer, an Adobe Flash Lite viewer and some games. The majority of these applications support background execution; for example, one may listen to music while browsing the Internet, and then may switch to write a text message or e-mail, without having to close any applications. With the exception of newer Sony Ericsson phones like K550 and W610, non 'smartphones' typically cannot do this or can do it in only a very limited way; for example, only the music player can run in the background. The feature which most distinguishes the N73 from other 'N'- or 'E'-series Nokia mobile phones is the 3.2 megapixel autofocus camera. The N73 does not support Wi-Fi.

Java applications as well as Symbian (S60 release 3) applications can be installed to or removed from the phone by the user, using either the Nokia PC Suite software, which is included with the phone, or the installer application on the phone itself. Notably, Nokia supports firmware upgrades to the N73 to be made by the user via a module in Nokia PC Suite or directly over-the-air. Since the N73 supports access via Bluetooth and USB Mass Storage (amongst other methods), it is possible to transfer large collections of files to and from it using any computer that also supports either Bluetooth or mass storage via USB (e.g. Microsoft Windows, Linux; Mac OS X etc.). The N73 uses a database system for the supplied 'Gallery' applications (which permanently run in the background, in order to reduce seek and operation times) and again these databases can be updated locally on the device itself. This means that supported image, video and audio files can be placed almost anywhere in the file system and browsed easily, and in the case of MP3 audio files, by ID3 tag (e.g. 'album'; 'artist' etc.).

Besides the simple edition, Nokia released three other editions of N73.

In addition to the basic N73, Nokia subsequently released the N73 'Music Edition'. It has technically the same hardware as the N73, but the 'multimedia button' on the keypad has been replaced with a button that starts the music player. The Music Edition also includes a 2GB memory card and the phone is completely black. The Music player on the Music Edition supports Album art and visualisations, while that on the regular N73 does not. It also has an improved control interface where 'play', 'pause', 'stop', 'next' and 'previous' may all be selected directly by simply pushing the phone joystick in the appropriate direction rather than having to scroll through on-screen buttons for these controls and then select them as on the ordinary N73. The Music Player application stays in the background at all time (even when music is not being played) in the Music Edition of N73. In the latest firmware versions this application can be terminated, but doing so prevents from using the Music Edition remote control to start listening to music, until the application is started again by using the phone's keypad.

Nokia has also released another model of the N73 called the 'N73 Special Edition' in the Middle East and North Africa. The phone was released during the Muslim holy month of Ramadan in 2007. The phone has the same hardware as the other editions of the N73 but comes pre-loaded with Islamic applications and the phone is completely white.

However, all three versions of the N73 appear to be being updated to have the same software as each other, essentially making them the exact same phone – the V4.0726.2.0.1 dated (26-06-2007) updates the standard N73's Music Player to the same version as the Music Edition's enhanced Music Player detailed above, while keeping the 'multimedia button' function, essentially making it an Internet Edition. Although Nokia N73 Software version 4.0735.3.0.2 & 4.0736.3.2.1 was released October 2007, some might not have availed this firmware version, because of limited actions to other countries.

Also, during recent UK Nokia poster campaigns, the black (ME) version of the phone was advertised without the term 'Music Edition', and the O2 UK shop sells the N73 in both Silver/Plum and Black, with the Black version having the multimedia button rather than the music button.