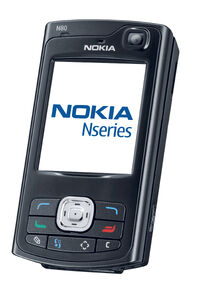 The Nokia N80 is a multimedia 3G smartphone made by Nokia with support for high-speed UMTS/WCDMA connections. Features include a 3.1 megapixel camera (interpolated from 2.0-megapixels) with built-in flash (on the back of the device), another camera (on the front) for videoconferencing, Wi-Fi (802.11g), Universal Plug and Play (UPnP), FM radio, Bluetooth 1.2, digital music player functionality, MiniSD memory card slot, and support for 3D Java games.Template:Fact Because of its memory card and relatively large screen, it can function as a portable media player.Template:Fact

The N80 is Nokia's first UPnP-compatible phone, allowing the transfer of media files to compatible devices over Wi-Fi.Template:Fact

Nokia originally announced the N80 as supporting Bluetooth 2.0, however it was released with Bluetooth 1.2 [1][2][3]. Therefore the N80 does not currently support stereo playback over Bluetooth.

The Nokia N80 Internet Edition is a new version of this handset with the same hardware as the normal N80. It has been released in Q4 of 2006 and is available in Patina Bronze or Pearl Black, and has the followingTemplate:Fact additional software included. As of January 2007, the Pearl Black model is available for sale in the US for $499[4]

Nokia have now announced that the new Internet Edition firmware is available for the 'classic' N80 by using Nokia Official Software Updater, downloadable from Nokia.com.

Before the Internet Edition firmware was made available on the Nokia Software Updater, end users could update the N80 to the same specification as an N80 Internet Edition by flashing the N80 with the firmware from the N80 Internet Edition [5].This required the use of several hacked Nokia servicing software applications, including the Phoenix Service Software (or Nokia Software Update with Nemesis (by changing product code)). This method is of questionable legality in some jurisdictions, and may violate the terms of the phone's warrantyTemplate:Fact. There are reports of the occasional failure of this method due to user error or for other unknown reasons, leaving the phone in an unusable state from which only a properly-equipped service center could recover it.