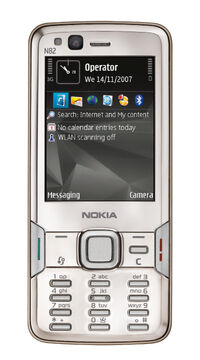 The Nokia N82 is a smartphone announced by Nokia on November 14 2007. It is part of the company's Nseries line of smartphones which features the N-Gage gaming platform and the Nokia Music store (where available). The N82 runs Symbian OS v9.2 based S60 3rd Edition platform with Feature Pack 1. Its also can be upgraded to newer version by using Nokia Software Updater.

The first Nokia phone with xenon flash, it has a 5 megapixel camera and is still considered the best camera phone on the market.[1][2]

The N82 includes a built-in accelerometer for video stabilisation and photo orientation (to keep landscape or portrait shots oriented as taken). The N82 has automatic screen rotation (270, not 180 nor 90 degrees), as a standard feature. The latest available firmware version is numbered v35.0.002. U.S. releases of the N82 do not support U.S. 3G frequencies (850 and 1900 MHz) and Nokia has not announced plans to release N82s in the United States which do. As a result, applications and features that require the N82 to connect to a 3G network cannot be used in the United States.

The China market version of the N82 has a different hardware platform and has the WiFi and the UMTS radio removed (i.e. no 3G support). It also has a different product code (RM-314 as opposed to RM-313) and the firmware is not compatible. It can be easily identified by the lack of the line saying "WLAN scanning" on the idle screen. This version is for mainland China only and the N82s in Hong Kong and Macau are standard APAC RM-313s with the 3G and WiFi.

The N82 camera makes a shutter sound (variable sounds, swiched off by third party programs) and flashes a distance-estimating red LED near the phone's flash while taking a picture. Although the sound can be changed, it cannot be turned off in many regions including Asia and North America. This feature was embedded to protect people's privacy. The European and Chinese firmware are exceptions to this - they can mute the shutter sound when the mobile is in silent mode. In hacked phones, there are unofficial ways to remove the shutter and focus sounds. One way is to change the product code to one of the Europe codes[3], another is to hack the phone to gain access to a configuration file to alter it to switch off the sounds[4]. However, both of these methods will void warranty, and neither of them removes the autofocus red light. Note that the autofocus light is switched off automatically when the battery is below three bars.

The users of non-hacked N82 can still take a photo without any shutter sound with the panorama image capturing application named "Panoman" which comes pre installed with the phone in few regions. However, even with panoman, the autofocus red light can not be turned off completely.