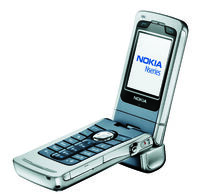 The Nokia N90 multimedia is a smartphone with two displays and Carl Zeiss optics (made by Konica Minolta). It has a 2 megapixel built-in digital camera with autofocus, 20× digital zoom, integrated flash, macro mode and the ability to record high quality video (352×288 MPEG-4 video with AAC-LC audio). The phone has no vibration feature. The screen swivels through 270 degrees so that the phone can be handled in a 'video camera' style. The camera lens also swivels to allow shots from unique angles.

The N90 does not have a built-in hard disk drive like the Nokia N91 but it features 31 MB flash memory and is usually packaged with a 64 MB or 128 MB in-box DV-RS-MMC memory card. Nokia continues its recent tradition of bundling a USB data cable with the phone, previously an aftermarket item priced close to US$40. A 1 GB memory card allows storage of four hours of video on the handset.

The Nokia N90 began shipping in Q2 2005. It is available in countries such as Australia, Singapore and India, and in Q1 2006 was made available in the United States. In 2006 it was available for around the equivalent of US$720. Besides the expensive price, the Nokia N90 does have some problems as well. The size of the phone is pretty big, the phone is also very heavy and chunky, which makes it a bit unattractive to some, but the unique features of this phone are worth the trade off to others.