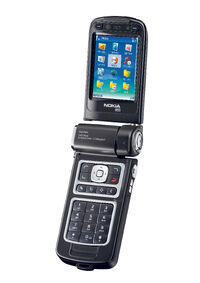 The Nokia N93 is a smartphone by Nokia especially designed for multimedia use. It was introduced in April 2006 and released in July 2006.

The N93 has improved camera capabilities compared with the earlier N90. The phone has a 3.2 megapixel camera, Carl Zeiss optics and 3x optical zoom as well as a 30 fps VGA-resolution MPEG-4 video recording capability. It was the most advanced camera phone from Nokia at the time of its release.

Community content is available under CC-BY-SA unless otherwise noted.