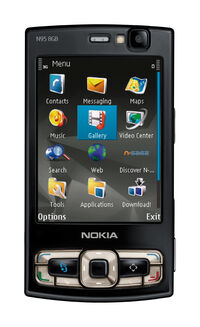 The changes compared to the regular version are:

This table lists only the specifications that differ between versions of the N95 models. (Most details in this table are from [5] [6] [7].)


Cite error: <ref> tags exist, but no <references/> tag was found
Retrieved from "https://nokia.fandom.com/wiki/Nokia_N95-2?oldid=3079"
Community content is available under CC-BY-SA unless otherwise noted.